First broadcast in 1994, Tent Show Radio is a one-hour weekly radio  program created from the best live recordings from acclaimed musical acts who grace the Big Top Chautauqua stage each summer in beautiful Bayfield, WI.  During intermission, host Michael Perry spins a story “from the backstage dressing room, with the one lonely little light bulb burning."  Topics range from Mike’s battles with trees, to the behavior of rogue chickens, to the search for hope while stoking a wood stove in the darkness. ​ Running 52 weeks a year, Tent Show Radio is broadcast on 31 listener supported radio stations across 6 states and on most podcast streaming platforms.

Tent Show Radio is independently produced by Big Top Chautauqua and is made available around the country at no cost to public radio stations and around the world to listeners on Google Play, iHeartRadio, iPhone/iPad App, Spotify, and Stitcher Radio.
What artists have been featured on tent show radio?
What Radio stations air tent show radio?
Tent show Radio is broadcast each week on these fine independent stations.
​Some stations offer “Live Air” streams which you can find more information on their websites listed below.

An easily confused and very shy individual, Charlie Parr has been traveling around singing his songs ever since leaving Austin Minnesota in the 1980's in search of Spider John Koerner, whom he found about 100 miles north at the Viking Bar one Sunday night. The experience changed his life, made him more or less unemployable, and brings us to now: 13 recordings, 250 shows a year or more, 200,000 miles on a well broke in Kia, and a nasty fear of heights. Resonator fueled folk songs from Duluth Minnesota. “Spider” John Koerner. Dave “Snaker” Ray. Tony “Little Sun” Glover. The names are legendary, and the seminal country-blues trio they formed in the early Sixties influenced a musical era with its passionate treatments of rare blues stylings. A self-described fun-loving trio of misfits, they turned audiences on their heads with foot-stomping performances throughout the U.S., and their series of Elektra recordings, commencing with Blues, Rags and Hollers, are considered the cornerstone of the Sixties folk/blues revival.
Past Episodes​

For a complete archive of shows dating back to 2011, please visit the Public Radio Exchange:  HERE
​ 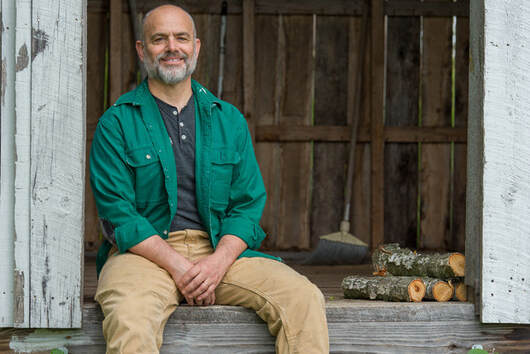 Each week Wisconsin’s own award-winning and New York Times bestselling author, humorist Michael Perry takes listeners Backstage at the Big Top. Michael Perry is the author of the bestselling memoir “Population 485: Meeting Your Neighbors One Siren at a Time,” and the essay collection “Off Main Street.”

Perry writes a weekly column for and has written for Esquire, The New York Times Magazine, Outside, Backpacker, Orion, and Salon.com. His essays have been heard on NPR’s All Things Considered and Michael Perry is also a contributing editor to Men’s Health.

​You can learn more about Michael Perry here.

THANK YOU TO OUR
2021 TENT SHOW RADIO SPONSORS!