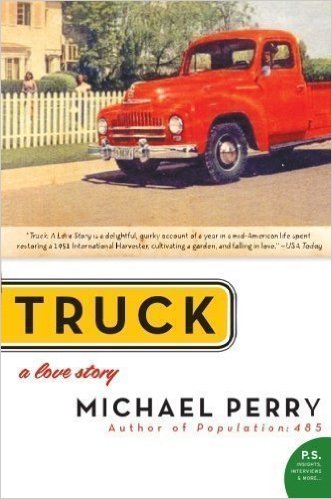 The author of Population: 485 returns, delivering a truckload of humor, heart, and . . . gardening tips? Think Zen and the Art of Motorcycle Maintenance, complete with stock cars, sexy vegetables, and a laugh track.

"All I wanted to do was fix my old pickup truck," says Michael Perry. "That, and plant my garden. Then I met this woman. . . ." Truck: A Love Story recounts a year in which Perry struggles to grow his own food ("Seed catalogs are responsible for more unfulfilled fantasies than Enron and Penthouse combined"), live peaceably with his neighbors (one test-fires his black powder rifle in the alley; another's best Sunday shirt reads 100 PERCENT WHUP-ASS), and sort out his love life. But along the way, he sets his hair on fire, is attacked by wild turkeys, takes a date to the fire department chicken dinner, and proposes marriage to a woman in New Orleans. As with Population: 485, much of the spirit of Truck: A Love Story may be found in the characters Perry meets: a one-eyed land surveyor, a paraplegic biker who rigs a sidecar so that his quadriplegic pal can ride along, a bartender who refuses to sell light beer, an enchanting woman who never existed, and half the staff of National Public Radio.

By turns hilarious and heartfelt, a tale that begins on a pile of sheep manure, detours to the Whitney Museum of American Art, and returns to the deer-hunting swamps of northern Wisconsin, Truck: A Love Story becomes a testament to the surprising and unintended consequences of love.