Join us for our own unique brand of shows that feature songs and stories performed by Big Top’s Blue Canvas Orchestra and Singers that bear the hallmark of exquisite musicianship illustrated by big-screen visuals. The Blue Canvas Orchestra (BCO) is Chautauqua’s house band that, together with Co-Founder and Visuals Director Betty Ferris and a multitude of talented guest artists, provides the entertainment engine that powers the Big Top. 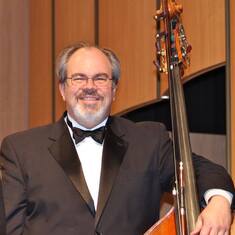 Vincent Osborn received an MM in Double Bass Performance from the University of Minnesota (2010), with studies from Christopher Brown of the Saint Paul Chamber Orchestra and a BA in Behavioral Arts and Sciences and a BA in Music with concentrations in Literature and Performance (2003) from the College of St Scholastica. Over the years, he has also studied with James Orleans (Boston Symphony Orchestra), Klaus Trumpf (international solo bassist & pedagogue) and Scott Harris (Virginia Symphony). He has also performed in the master classes of Gary Karr, Todor Toshev, Duncan McTier, and Paul Ellison.
​
Mr. Osborn joined the US Air Force Band at Offutt AFB, NE in 1978. For the next twenty years, until his retirement in 1998, he was stationed in Nebraska, Germany, New Hampshire, Virginia and Japan. During his time in the Air Force, he has played concerts throughout the eastern and upper mid-western United States, Europe, Japan, Australia and South Korea. He has played for Vice President Quayle, Ambassadors Shirley Temple Black and Walter Mondale, as well as the ambassadors to West Germany, Turkey, and Hungary. He also played at the 1990 Montreux and North Sea Jazz Festivals.  He has played with drummer Ed Thigpen; trumpeters Bobby Shew, Clark Terry, Jon Faddis, and Jeff Tyzik; saxophonist Ernie Watts; vocalist Maureen McGovern and Mary Wilson of the Supremes. He has recorded numerous CDs with the military bands and is principal bassist on the PDQ Bach recording “Music for an Awful Lot of Winds and Percussion” (Grammy award winning CD). Mr. Osborn has been the featured soloist on his wind band arrangement of Max Bruch’s Kol Nidrei with the USAF Heritage of America Band and has performed the Vanhal Concerto for Double Bass and Orchestra with the Kunitachi City Orchestra (Japan) and the Itasca Symphony Orchestra (Grand Rapids, MN). He has also played with the Northern Lakes Music Festival (MN), Pine Mountain Music Festival Orchestra (MI), Thunder Bay Symphony (ONT), Williamsburg (VA) Symphonia, the Richmond (VA) Symphony Orchestra, the Virginia Beach Philharmonic, the Kunitachi (Japan) City Orchestra, the OB (Tokyo, Japan) Symphony Orchestra, and the Heidelberg (Germany) Chamber Orchestra. Besides his work as a bassist, he has written over 100 musical arrangements for various ensembles.

Mr. Osborn joined the Duluth Superior Symphony Orchestra in 1998 and was appointed to assistant principal in 2003. He has also been the program annotator for the DSSO since the 2013-14 season. He is the principal bassist of the Lake Superior Chamber Orchestra and the Center for Early Music Orchestra at the College of St. Scholastica, and also performs with the Big Time Jazz Orchestra and the Blue Canvas Orchestra at Big Top Chautauqua. In 2015 Mr. Osborn was elected as president of AFM Local 18.